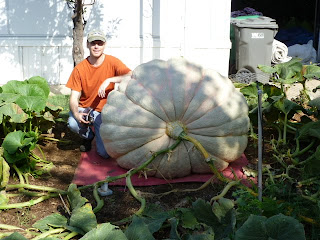 Just wanted to update you on our year! Both Vince and myself had planned on coming up to the weigh off, but when the date and location changed, we were unable to make the trip. So here is a quick look at our fruit. Above is my pumpkin and myself. She weighed in at 860 lbs, a little lighter than I thought she would go, but still a great fruit. Vince's pumpkin weighed in at 727 lbs. We were both blessed with sound pumpkins and enjoyed the season greatly. Both fruit were grown entirely organic as well. 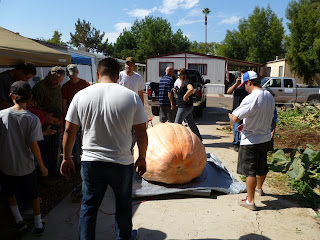 Vince's fruit came in very heavy to the charts, going 727 lbs, estimated at 640 lbs. A real beauty in color! 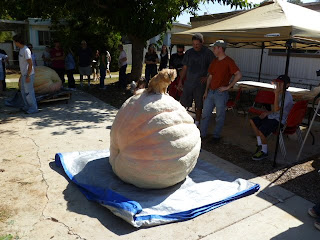 The 860 on the scale after the weighing was finished. A neighbors dog wanted to see the view from the top of the fruit! She weighed in a little light, estimated at 880 lbs. Used a certified ground scale and tarp was tared out of weight. 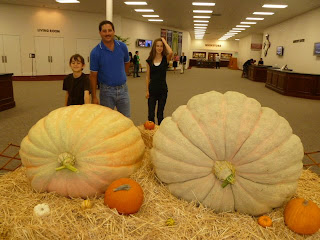 Vince and his kids with both of our pumpkins. The 727 on the left, and the 860 on the right. Both fruit were on display at Sonrise Church in Santee until halloween. 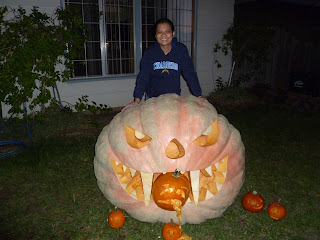 My wife with the 860 Fredricks 2010 all carved up on Halloween night. Eating another pumpkin! Note the guts coming out of the little guy as he is getting squashed! lol.