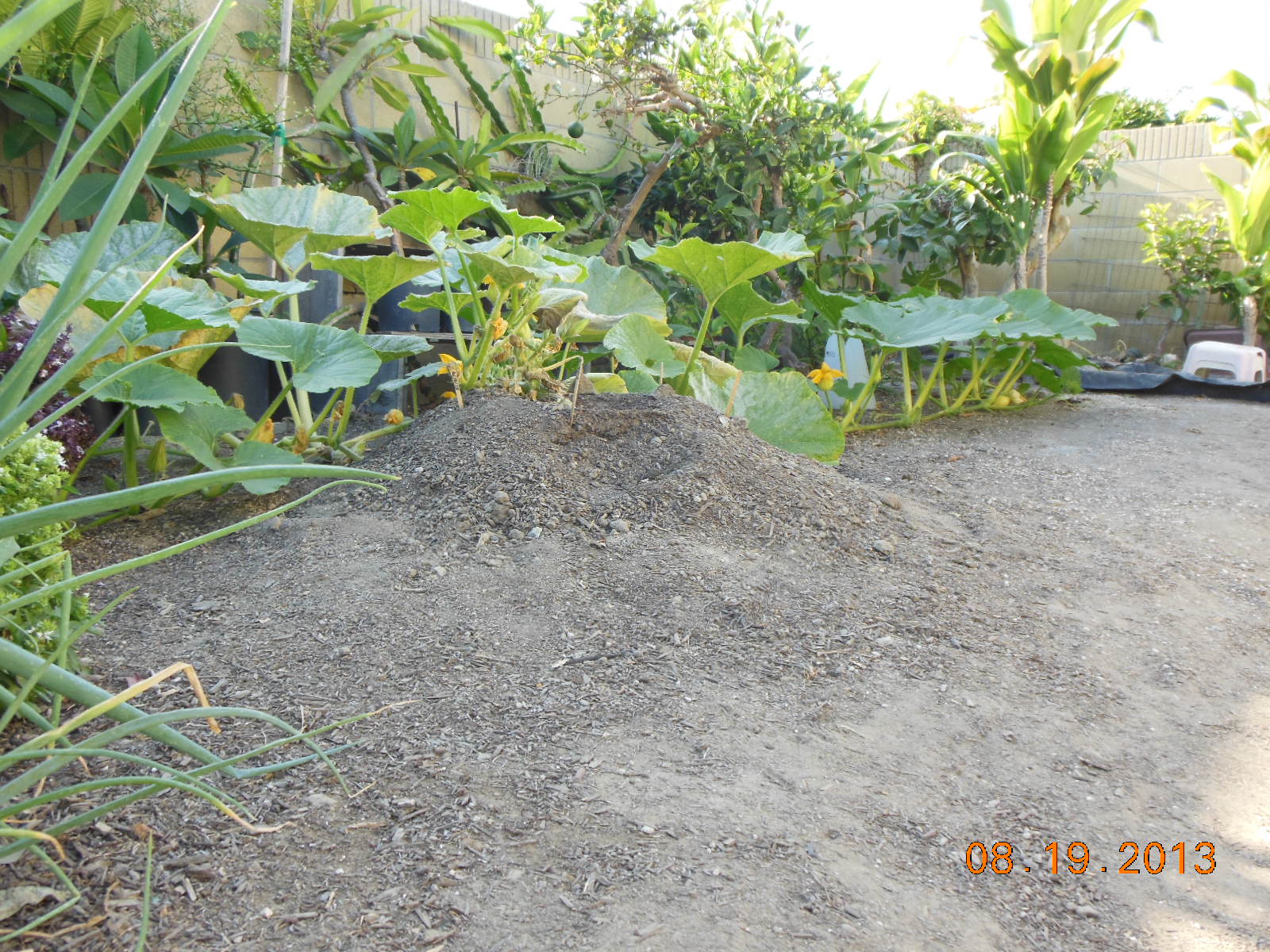 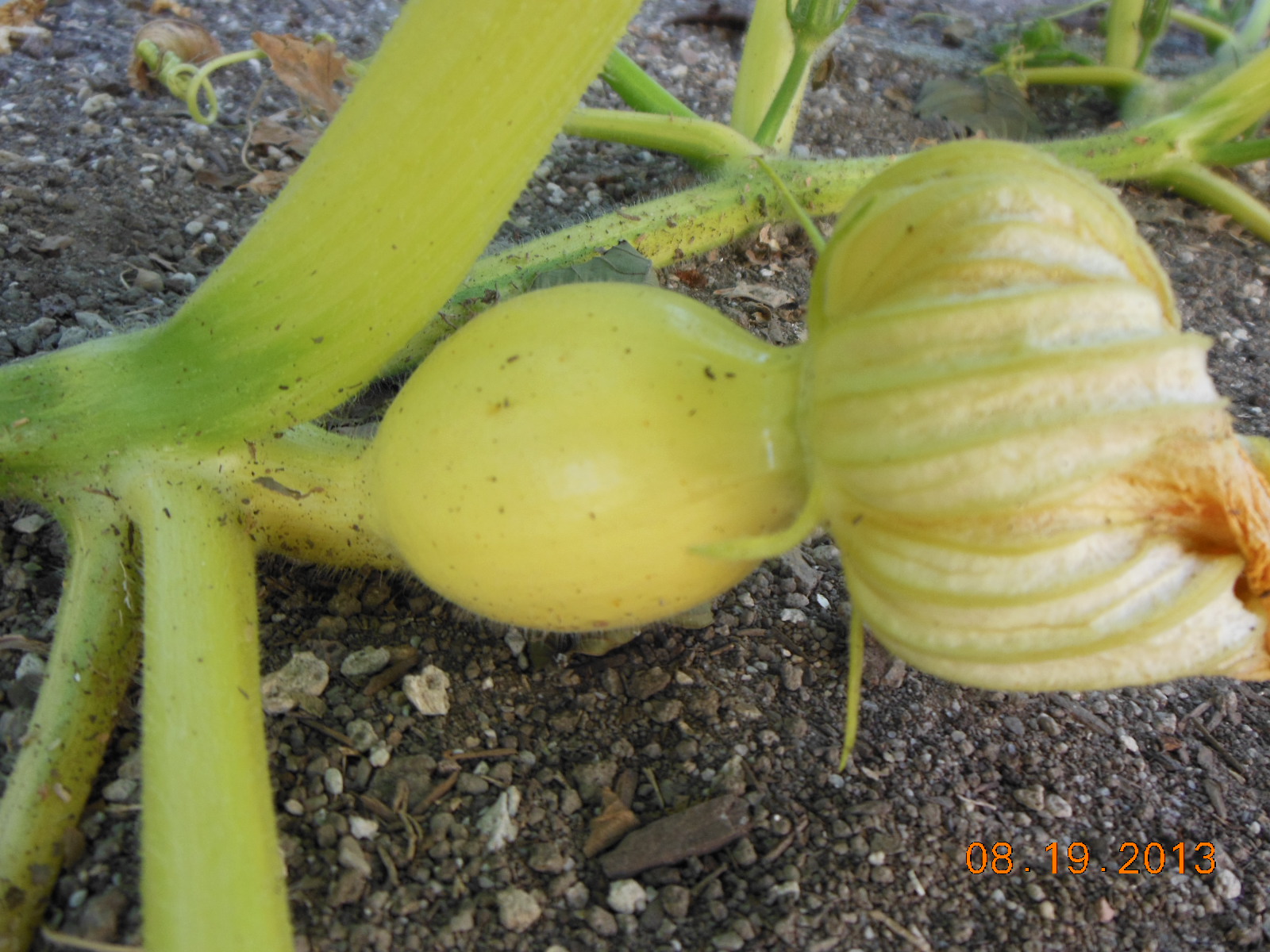 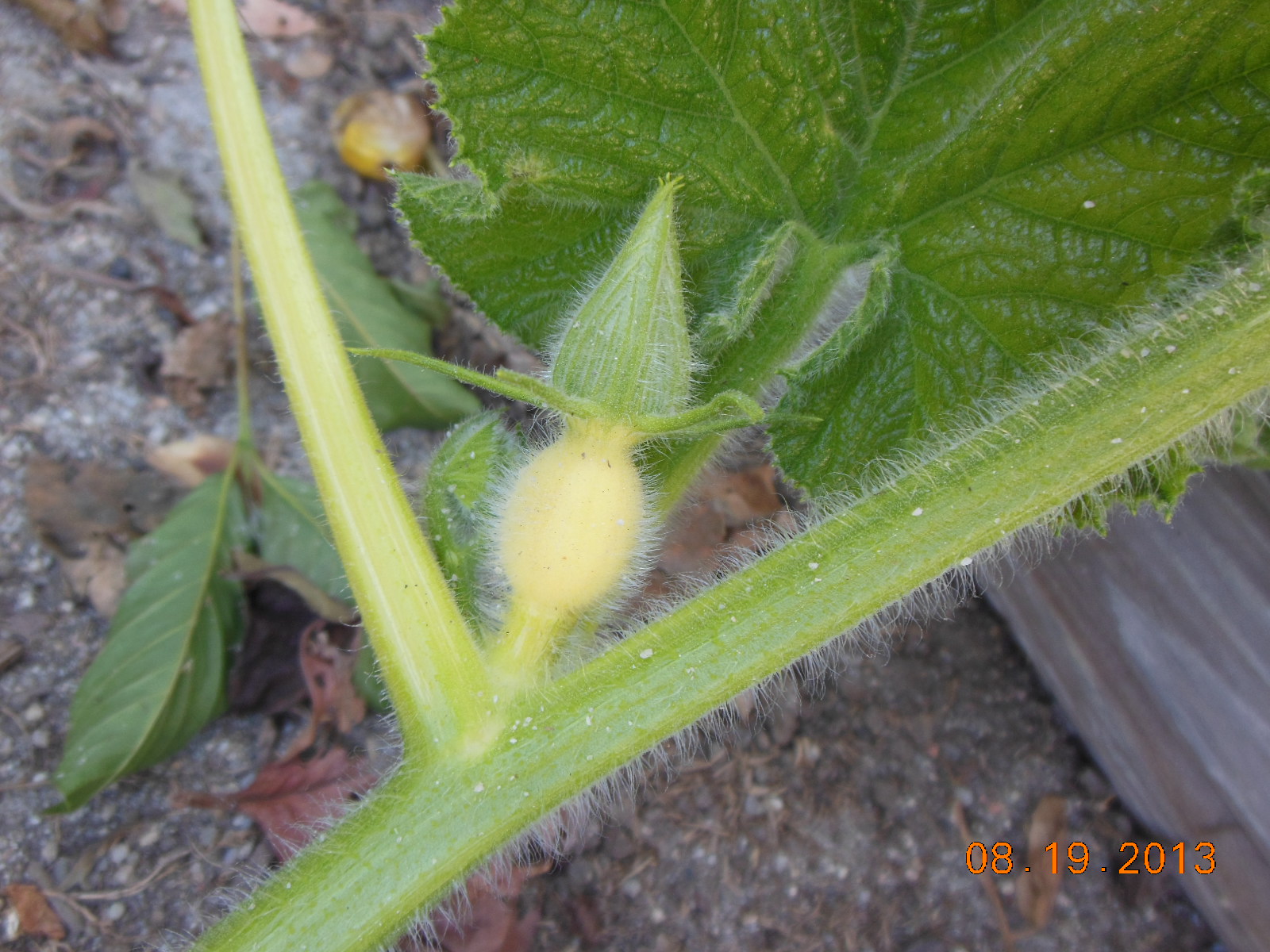 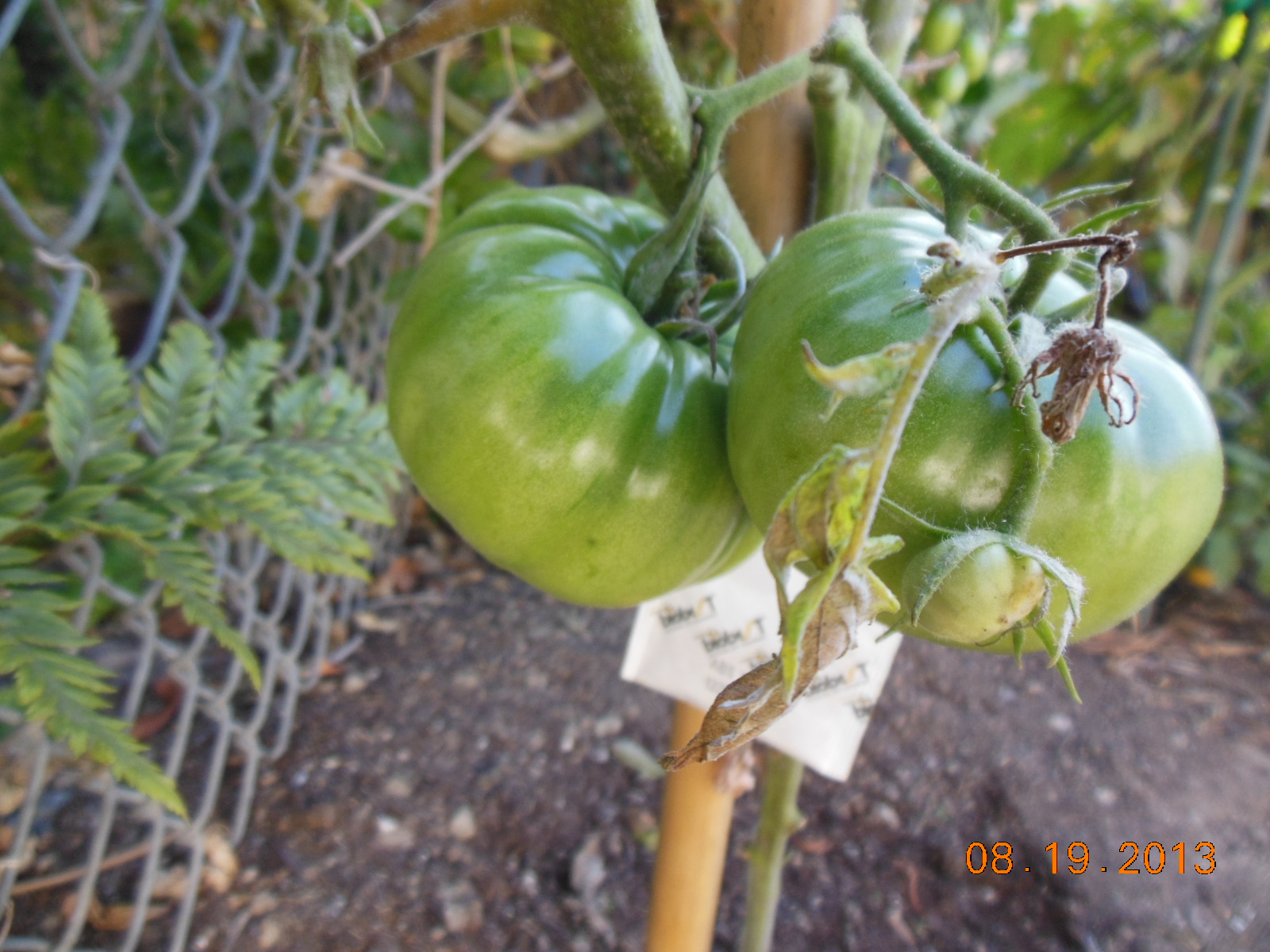 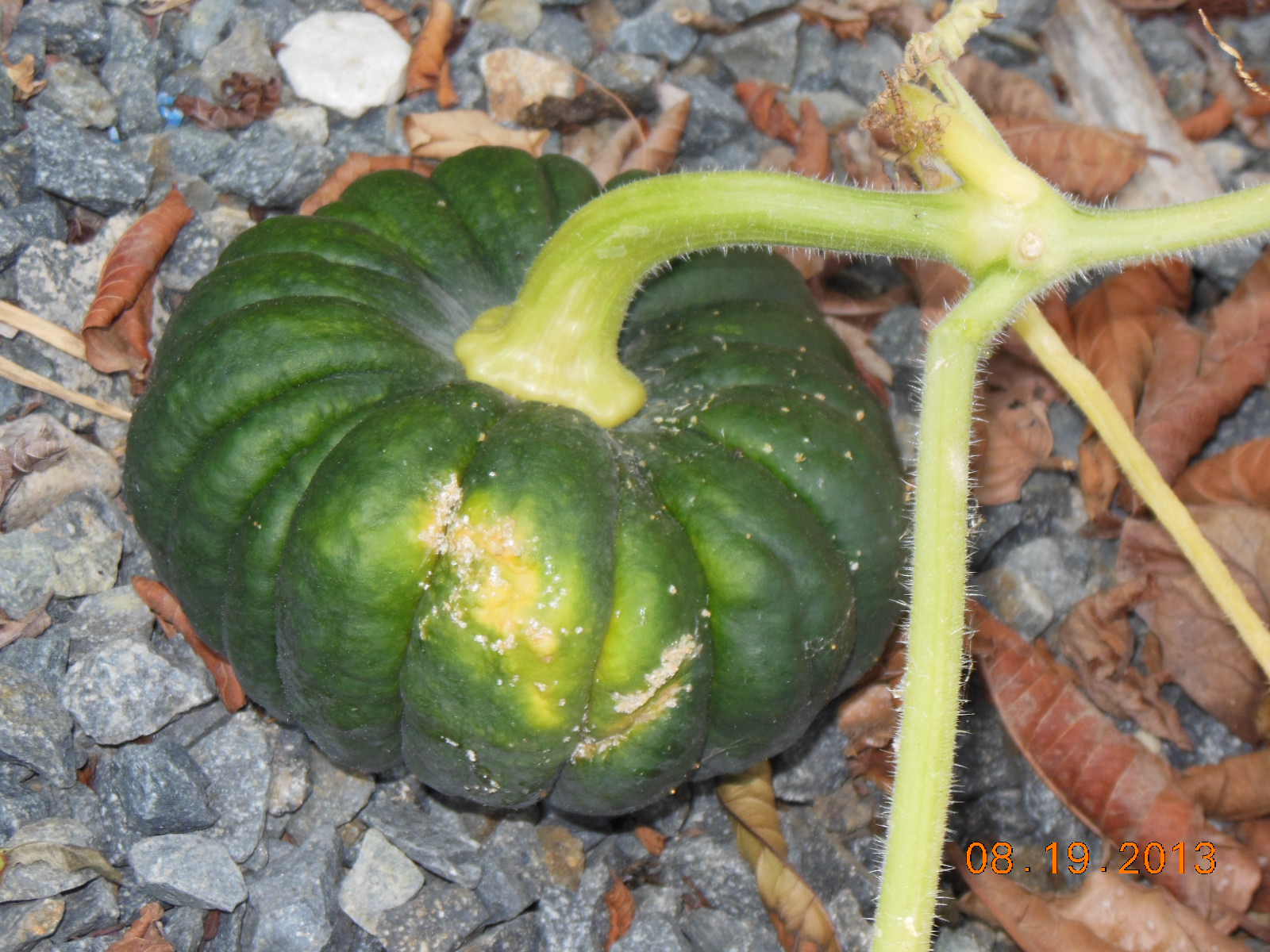 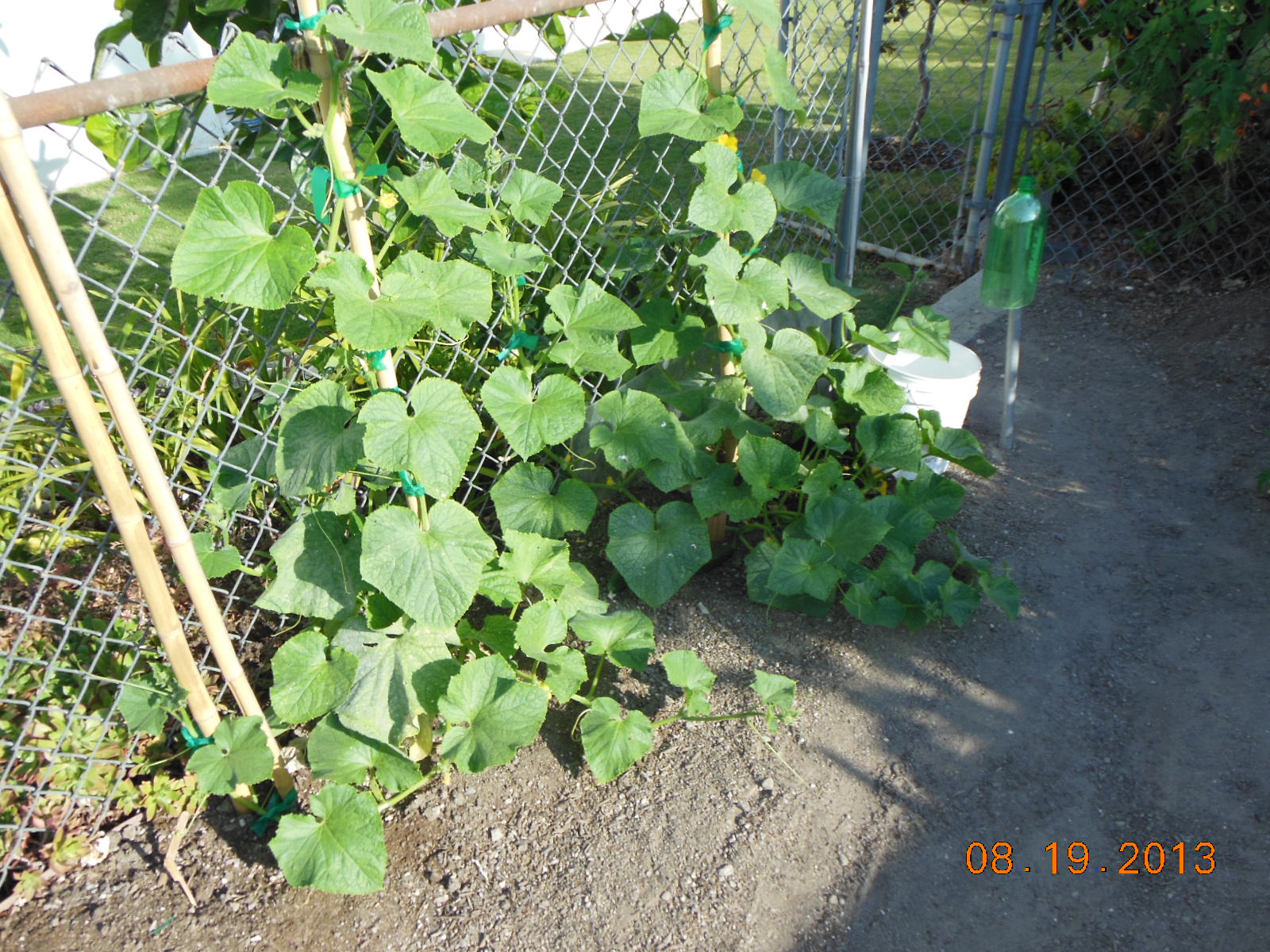 The last "Summer Dance" cucumber vines of 2013!
The Update: Salvaging a season
Good afternoon, Pumpkinistas!
Many growers have sent me e-mails this season. Invariably, there's always a friendly inquiry about how my pumpkin/pumpkins are doing.
Well, the short answer is okay, bordering on despair. Yes, as my grandmother Seki would say "Even monkeys fall from trees." (She would, of course, say it in Japanese, with a broad smile on her face while looking directly at me. This is one of the reasons that motivated me to study Japanese.) My initial plants didn't look like they were doing much, so I re-planted some back-ups in mid-June.
Pictured in the first few images of this posting is what I have so far this season. I am still waiting for a full pollination, and a giant pumpkin. The good news is that it will probably be growing all the way up to October 27th if fruit sets.
The bad news? Fruit may not set, and my season will end in a whimper.
Still, Michelle and I have grown many pounds of cucumbers and tomatoes the last few months, and that's a priceless experience.
So, to those growers still waiting for fruit to set: "Even monkeys fall from trees."
Posted by Stuart at 3:18:00 PM 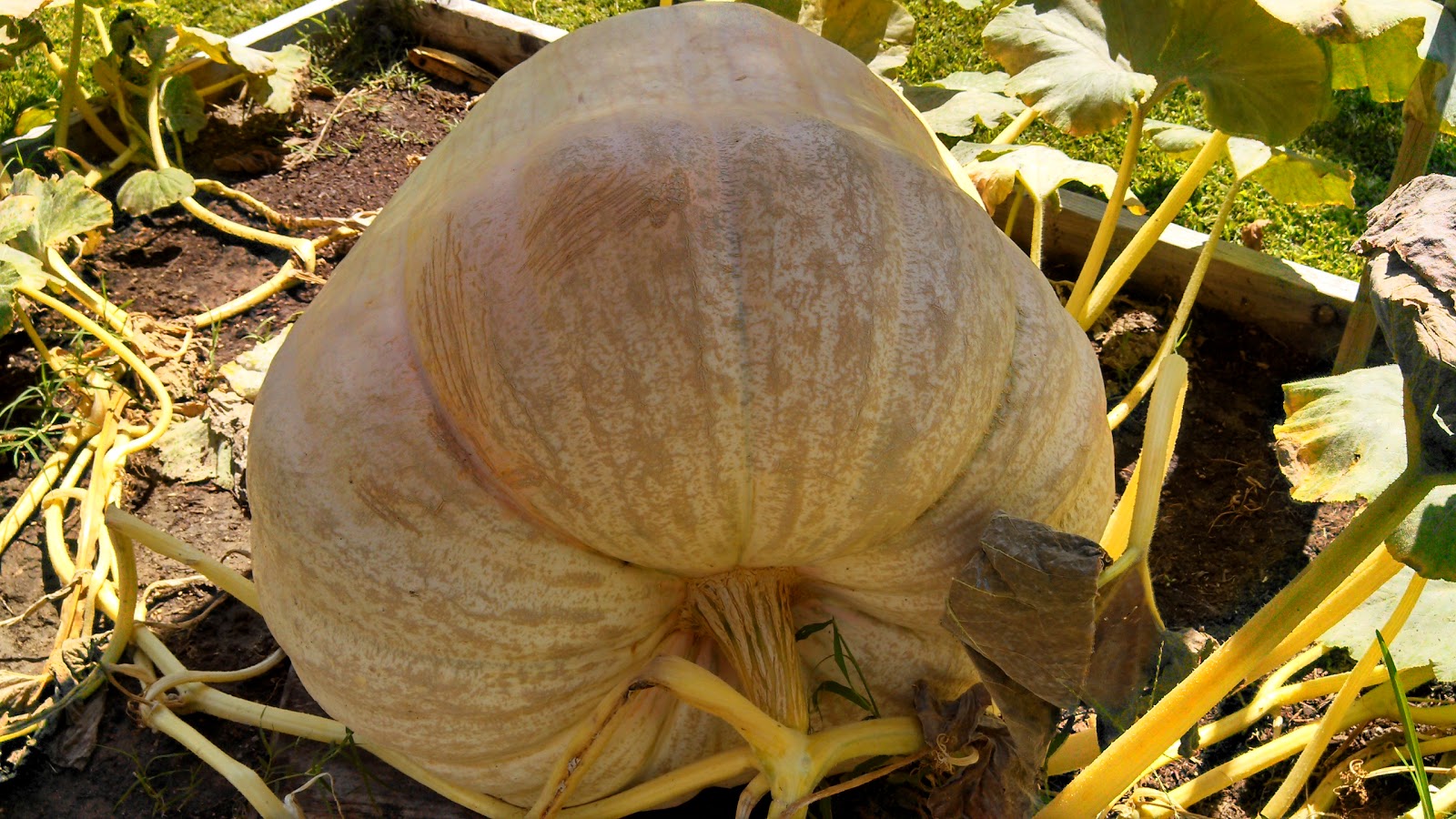 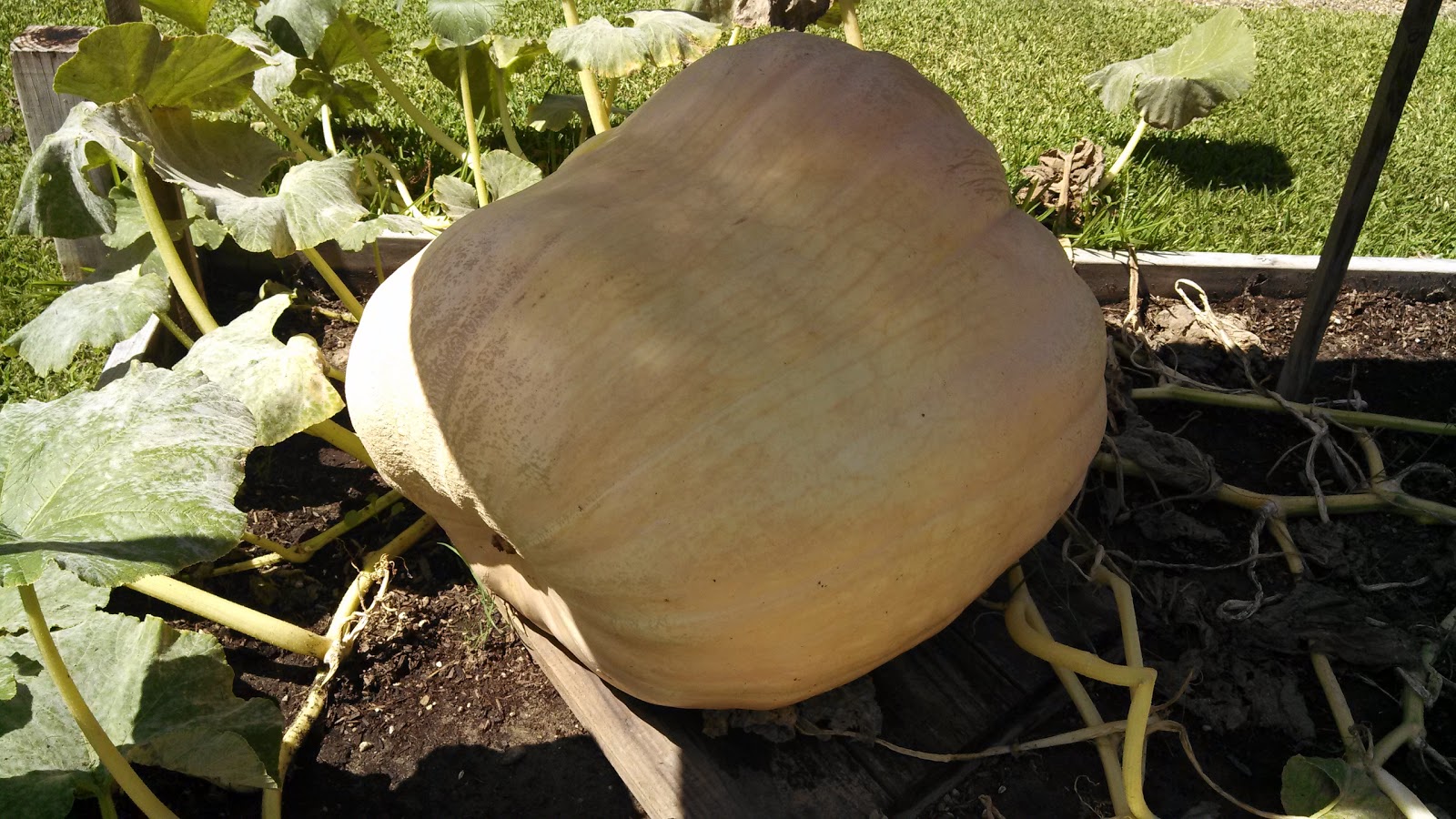 The Beast of Burbank in Repose...

These images are just in from the Sheridan Gardens giant pumpkin cultivation team.

I think it's pretty nice for a first season effort. In fact, I may simply concede the Masters and Institutional division to them in advance! 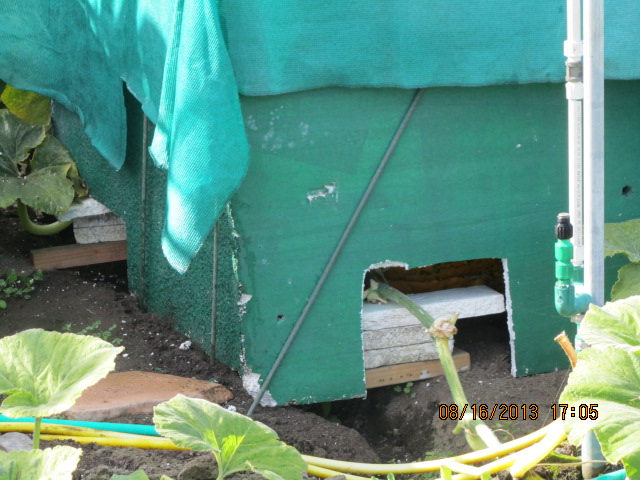 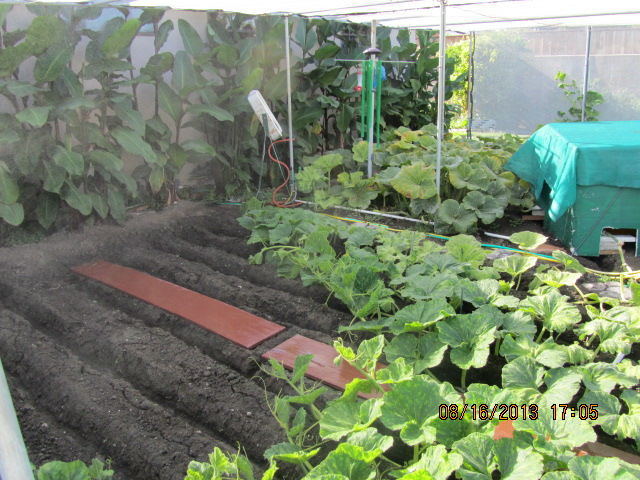 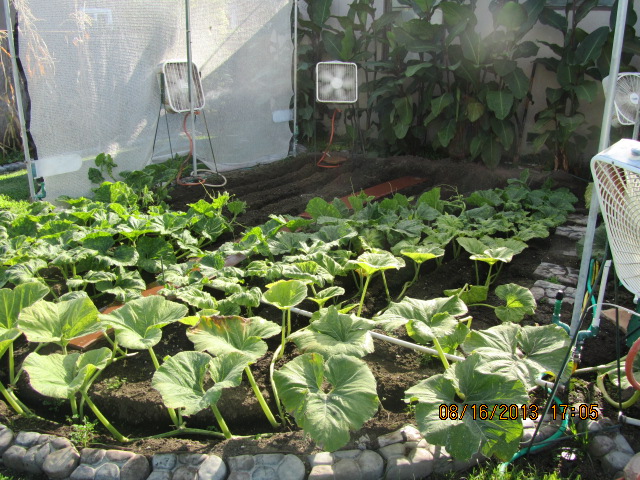 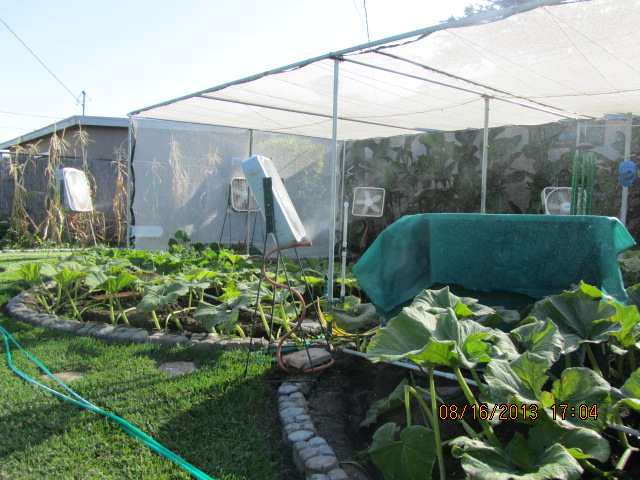 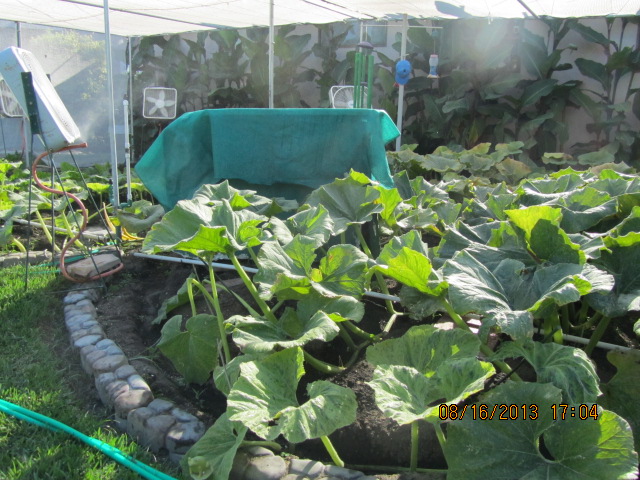 The Grays haven't let some weird bumps get them down! Please note the fans were turning when these images were taken last Friday. Also, the pumpkin's cover looks extremely effective.

"Hi Stuart, Glad to hear  you have a pumpkin coming. The heat is going to be a problem for all of us growing in southern CA this week. Our  plant is still  hanging in there Covers and misters are in full swing with the heat.." 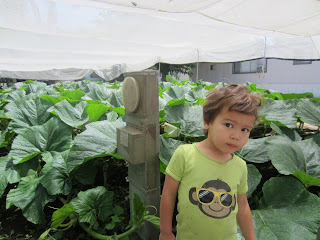 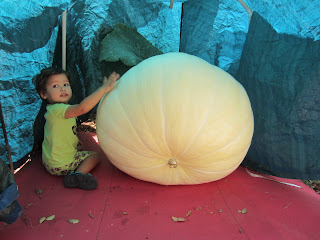 Here is our pumpkin at 30 days old. As you can see, Joshua loves to be around her. The plant is healthy and weather is exceptionally cool for August. We are way behind last year's numbers for the growth per day and weight, but we are doing our best to keep her going. We are slow and steady this year and having fun! 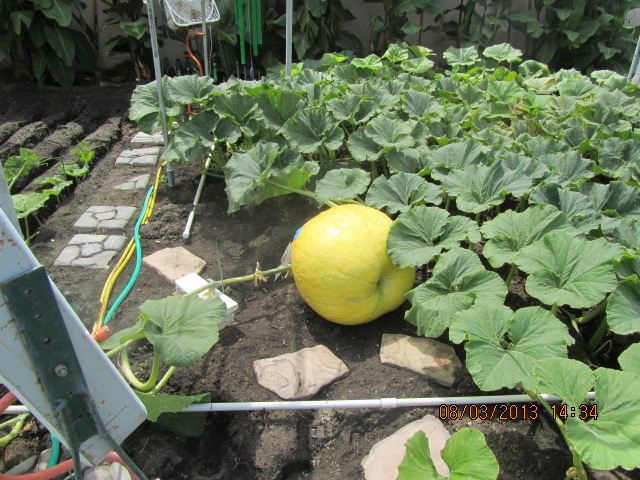 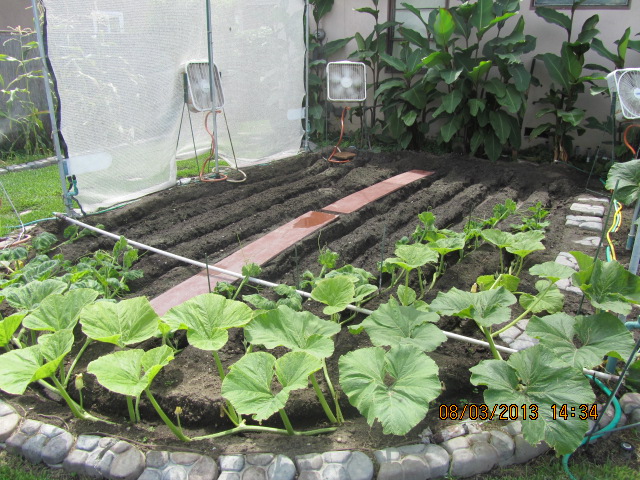 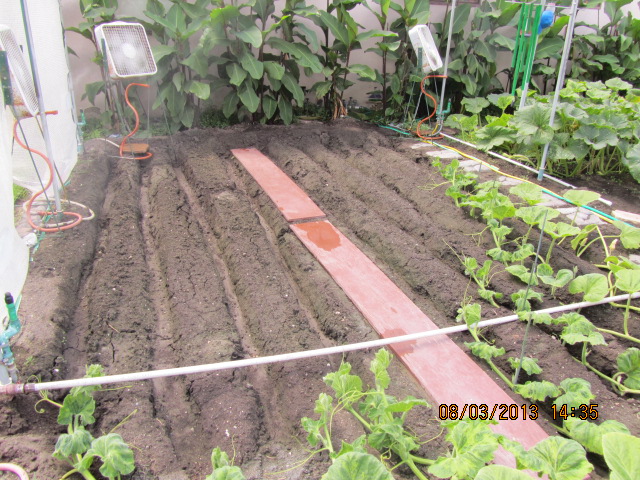 "Hi, Stuart, A lot happening in the Gray household. First, we had to pull the green polka dot plant. All it did was abort every time we pollinated. Then, if that wasn't enough my computer died. So that's why my update is so late. Now as you can see in the pictures, the only plant left is doing real well.  The cooler weather is really helping. Fingers crossed.   Hope everyone is doing well and growing the big one.  Until next week,  Mike and Susan" 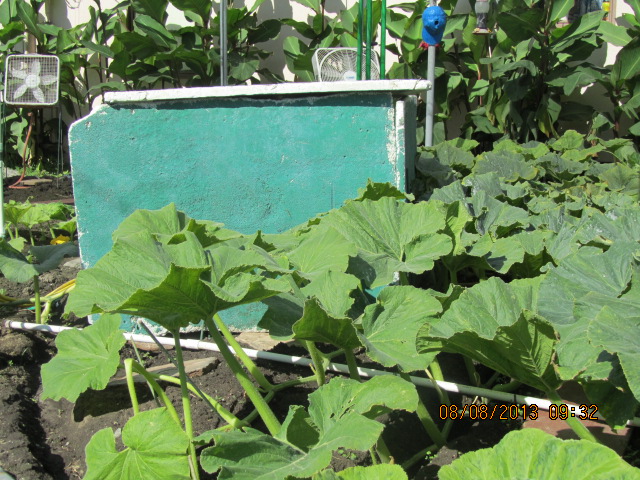 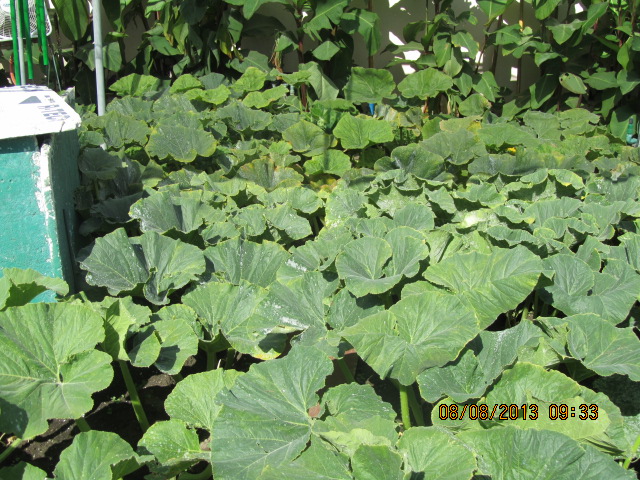 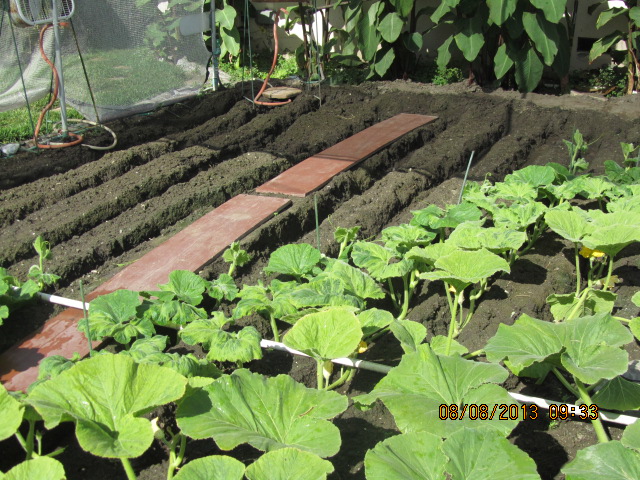 "Hi, Stuart, Well, this week we had to add the covers to insulate from the heat, to keep the skin soft and flexible. The plant is still looking good, and the pumpkin is growing well. We hope everyone is doing well also. Mike and Susan"

After an unexpected set-back, the Grays have rallied their growing efforts and are back in competition!