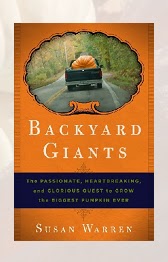 Susan G. Warren, Author
Review of "Backyard Giants" by Susan G. Warren
Good afternoon, Growers!
While planning my strategy for 2011, I read "Backyard Giants" by Susan Warren, http://www.backyardgiants.com/, Bloomsbury USA, New York, 10010, First U.S. Edition 2007. It's a very entertaining and fascinating account of the 2005 season of the Rhode Island father-son giant pumpkin growing team, Dick and Ron Wallace. You'll recall that in 2005, Ron Wallace grew the first giant pumpkin to weigh more than 1,500 pounds, 1,502 to be precise. The 2005 giant pumpkin growing season was fraught with sabotage, freak weather and growing conditions, high anxiety, dashed hopes, and finally, triumph.
Here's the biography of the author from her website: "Susan Warren is Deputy Bureau Chief for The Wall Street Journal in Dallas, Texas. She writes and edits news and feature stories related to oil and gas, discount retailers and airlines. The Journal also gives her freedom to pursue stories about other things she finds interesting for its famed "middle column" feature on its front page. She has written on such wide-ranging topics as people who buy Silly Putty by the pound, the dangers of frying turkeys in boiling oil, and the spring ritual of dewberry picking in the South. Backyard Giants grew out of Ms. Warren's October 2005 story about the trials of growing giant pumpkins."
Her background is ideal to bring the story and high drama of the Wallaces' 2005 season to life. In addition, Ms. Warren conveys very crucial and critical giant pumpkin growing advice from two world-class growers. Essentially, vine burying saved their season. (I will make the extra effort to bury my vines this season.)
In addition, a very pleasant and surprising sub-plot is Warren's account of Jack La Rue's 2005 season, the hall-of-fame grower in Yelm, WA that was part of a giant pumpkin growing workshop a few years back!
I was able to borrow a copy from the Orange County Public Library system. It's also widely available on-line and from the Pumpkinmania on-line store.
Happy reading, and have fun!
Posted by Stuart at 3:01:00 PM